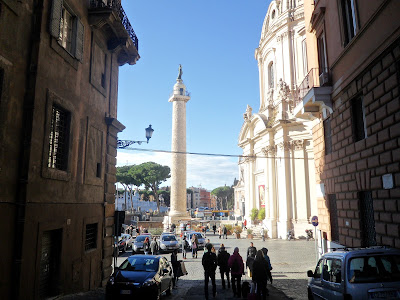 Rome on a sunny day in December. Warm, 60's. Way too much to see
but somehow we got most of it in. Vatican, Forum, Colosseum, Pantheon,
some interesting restaurants and lots of churches and little side streets. There
were quite a few folks out for the tour so at times it was Grand Central Station
at rush hour-especially the Vatican Museum. I read that it's free the last
Sunday of each month-I can't imagine what it must be like.
What I'm going to do with this posting is mix it up between the art, the streets,
the views and the churches. It's going to be mostly visual since I didn't
keep precise records of which of the 20 odd churches a particular photo
was taken. It's obviously a very photogenic place as you will see. Enjoy. 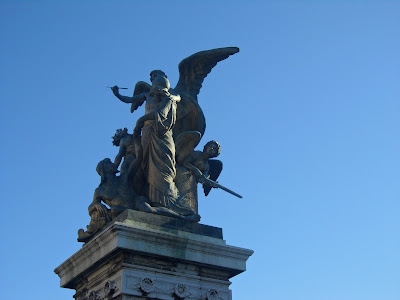 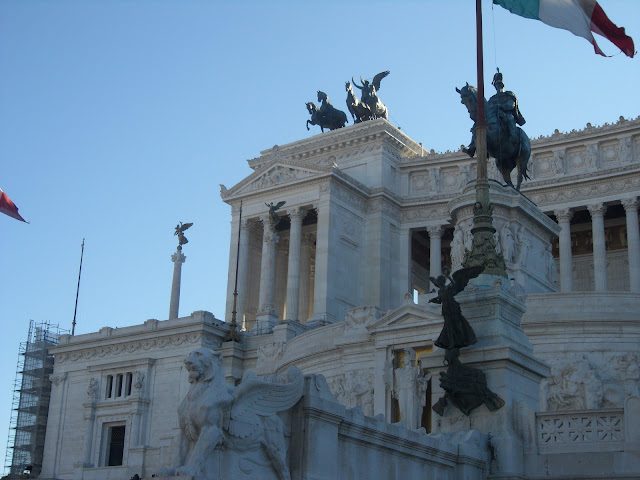 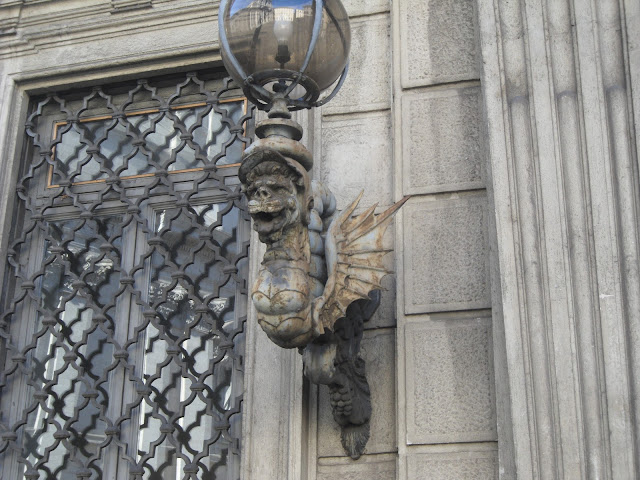 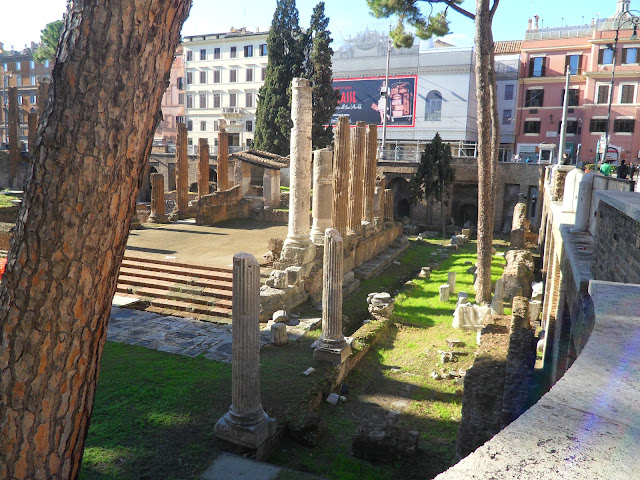 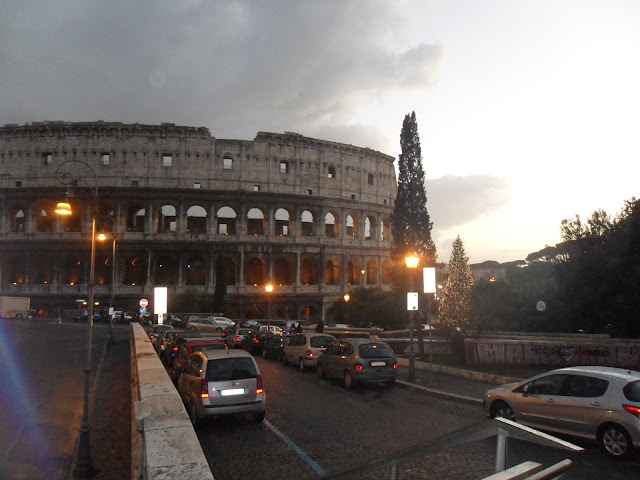 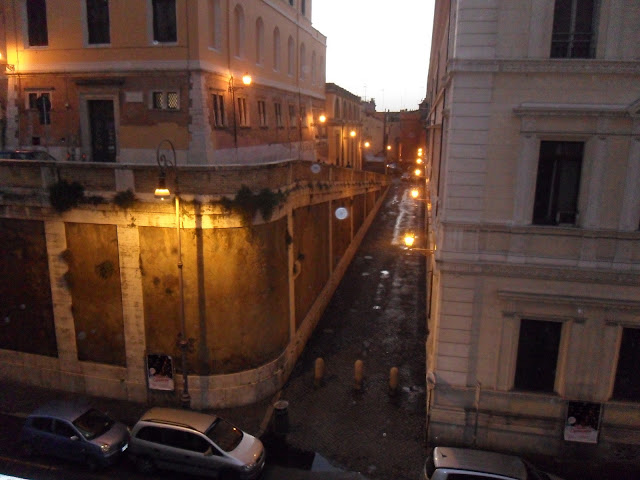 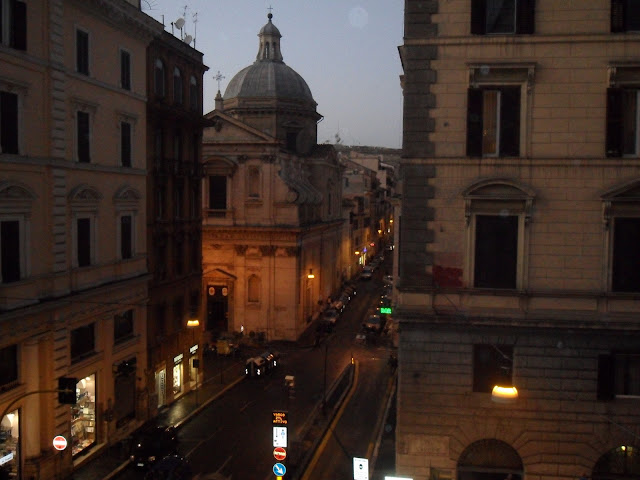 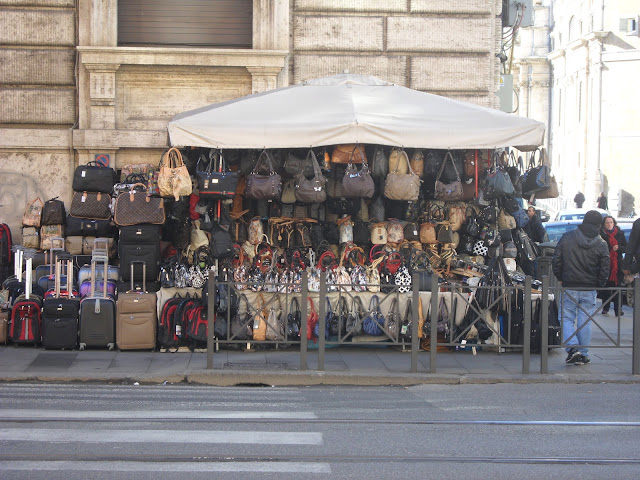 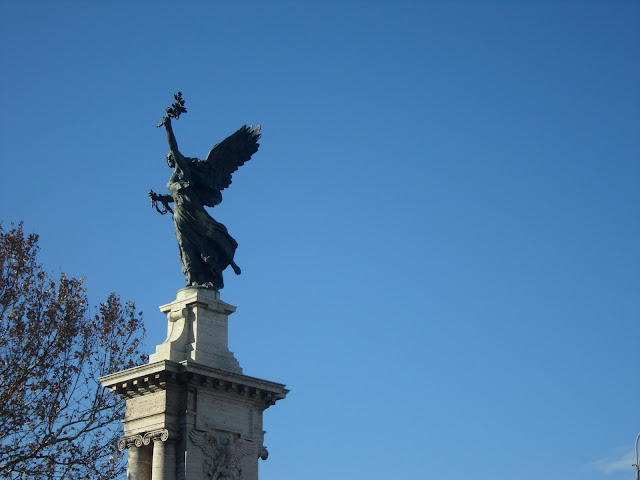 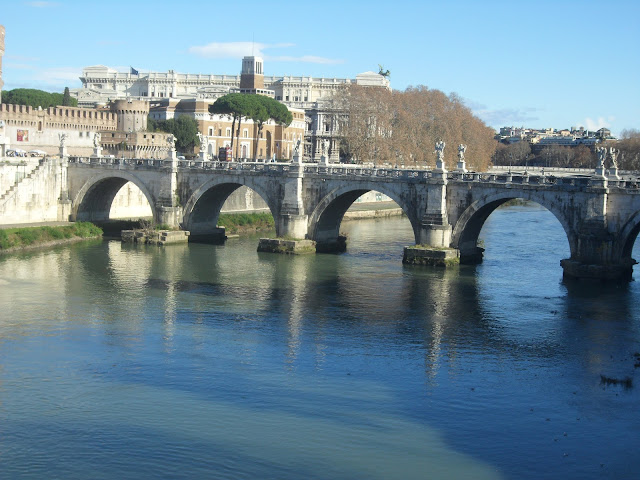 Bridge over the Tiber-leading to the Vatican. 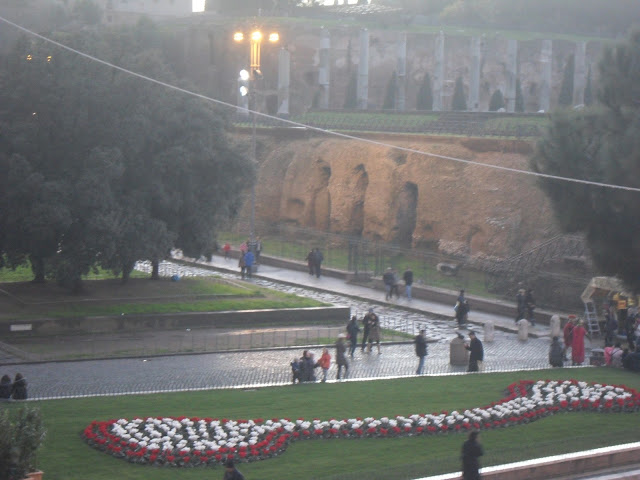 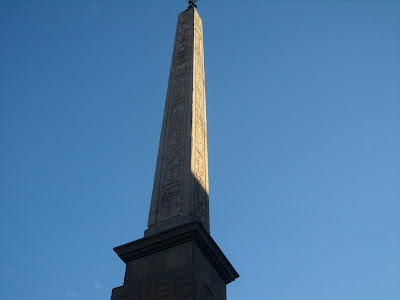 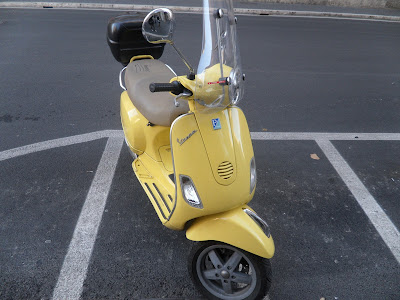 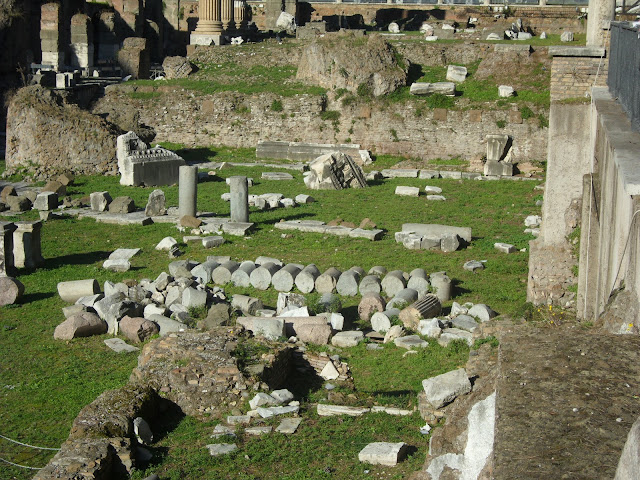 More Forum - end of part I-part II up next.
Posted by Michael Veitch at 9:25 AM No comments:

Odds and Ends Around Munich 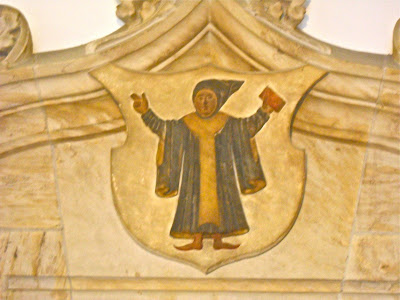 Here are some of the odd ball photos of things I've discovered
wandering around Munich. Above is the symbol of Bayern, a monk!
found inside the Rathaus in downtown Munich. The Rathaus is
the large central municipal building that looks like a Gothic Cathedral.
Somehow, thismonstrously huge building survived the bombing of World War II. 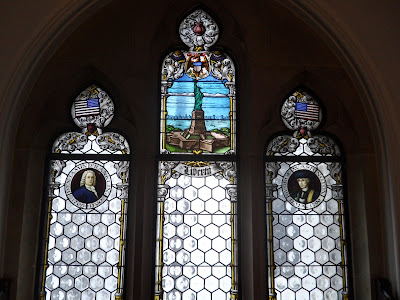 As I poked my nose into various halls and side rooms, I came across
this truly bizarre stained glass window depicting George Washington
and Benjamin Franklin. In the middle are the words "Liberty."
It is worth noting that downstairs from this window ( and there was another
depicting Abraham Lincoln , Thomas Edison and Andrew Carnegie) is a small memorial to the 1000 Jews who were taken away to Dachau from Munich in one fell swoop in, I believe, 1943. It is the only public memorial to the Holocaust outside of the museums that I have found. Maybe the stained glass was put in after the War? Not sure. 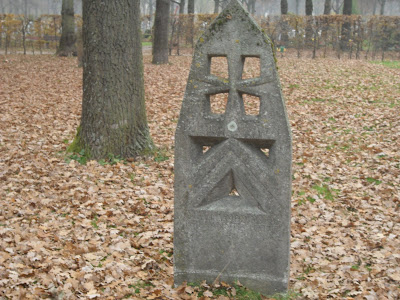 Behind my house here is a very old cemetery called Nordfriedhof. It is a very large and very flower and candle covered place. Right now it is sporting a Christmas motif and looks very festive. In the center are some very ancient gravestones surrounded by what appears to be large patches of open grass. When you start walking the lawns however, you find hundreds if not thousands of small plaques in the ground with just a name and date of death. These are the Munich residents who died in the bombing during the War. 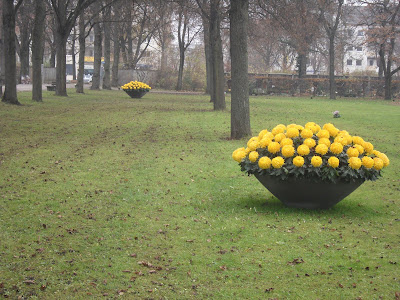 These really amazing flowerpots are part of the annual memorial to the war dead set across the lawns. There must have been at least 12 of these scattered about. The plaques are spaced about 12 inches apart across the whole lawn-maybe 5 acres or more. 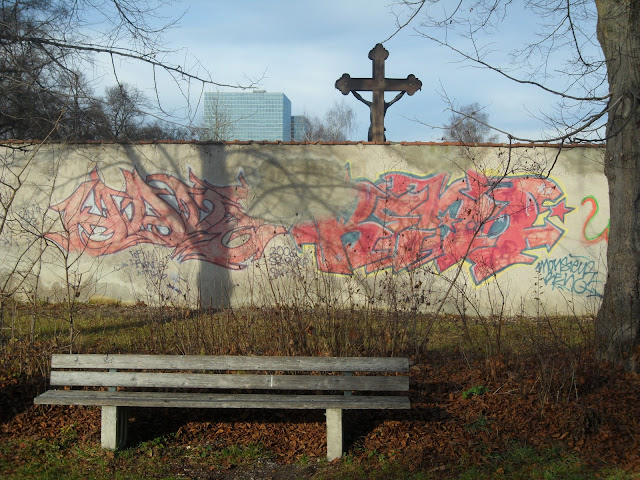 Just really liked the juxtaposition and composition in this one. This is outside looking in to the cemetery. 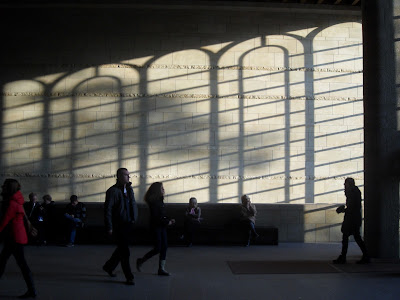 Inside one of the fabulous art museums here.The Neue Pinakothek. 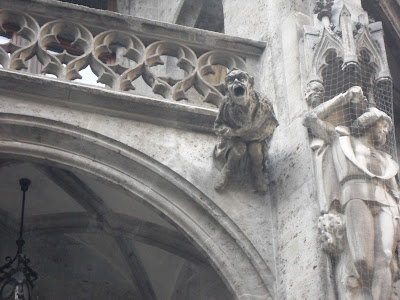 One of my favorite gargoyles. I think they also serve as drain pipes for the rain runoff. 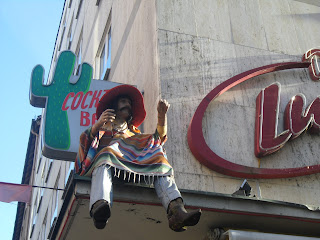 A variation on the theme in Munchner Freiheit. 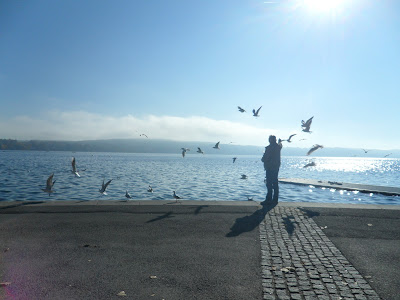 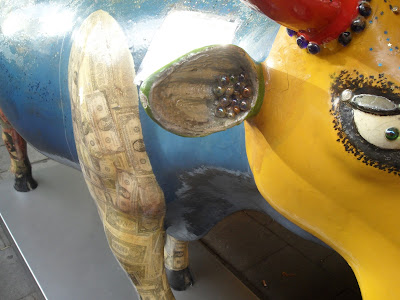 This strange lifesized cow found in the ViktraulienMarkt that has US dollars shellacked into it's legs. 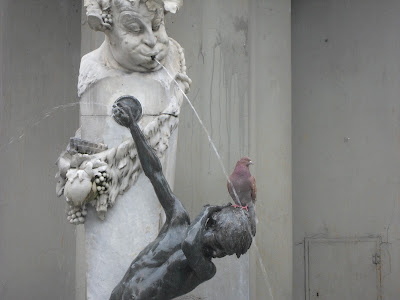 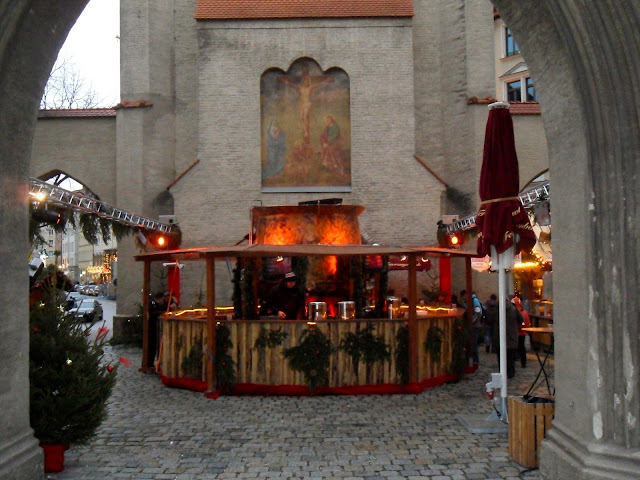 A Christmas Market and Gluwein stand under the crucifix inside SendlingerTor, part of the original medieval walls that surrounded the city.

Posted by Michael Veitch at 9:26 AM No comments: