My tour led me to "The Bunker" which was maybe the scariest place I have ever visited in my life. This was the prison inside the concentration camp,if you can imagine such a thing. Again, I would refer you to the above mentioned Dachau Memorial web site for interior photos and the history. I could not bring myself to take photos in this building and the vibes were extremely powerful. I don't think the nun's prayers have totally reached this place yet. This is where the various clergy were housed and the political and "special" prisoners- no sunlight for days-food every fourth day-torture-daily executions in the courtyard where the student groups are now standing-mostly Russian POW's. 300 feet long at least. Each cell was about 8x8. My footsteps echoed down the very long hall between the cells and I could imagine this same sound being heard from within the cells over and over again, day and night. It was dreadful.

As I was finishing up the tour, I went down the Path of Remembrance which runs alongside the factory buildings where the slave labor toiled and many ultimately survived because their labor was so vital to the German war effort.As I walked the path alone, I felt distinctly that I was being watched and as I turned, sure enough, one of the riot police was watching me very closely from behind the fence. In addition to this little episode, it should be mentioned that the whole Memorial site completely stank of manure(?) being spread on a neighboring farm which added to the whole effect. I'm sure it stank much worse when in full swing.

I said a prayer and left-it was quiet and somber on the way out. I avoided the cafeteria where full meals and espresso could be ordered up-even wine and beer- but not the replicated prison "soup" which I think should be on the menu. Still, it was a very very moving experience and one I would recommend to anyone visiting Germany. 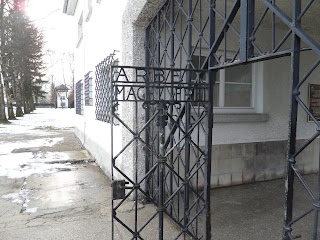 I made the journey just a few short miles outside of Munich to Dachau, a large city (40,000 pop.) on the outskirts. Home to one of the World's most horrible and accessible scene's of man's inhumanity to man. I have studied and visited numerous Civil War battlefields, Revolutionary War sites, Native American battlesites and numerous historical sites in many countries, including Celtic stone circles and mines in Wales and Highland battlefields in Scotland,  but I must admit, I was feeling somewhat nervous on the ride out to Dachau-I had grown up hearing the stories and seeing the newsreels but had never actually set foot in a concentration camp. Maybe the repeated episodes of  "Hogan's Heroes" I watched as a kid had made me and many other Americans numb to the stark reality of this place and the many other Camps that the Germans built during World War II. "I know nothing" drilled into our heads by "Sargent Shultz" week after week, and then daily after the reruns kicked in. We were told by Hollywood(?) it was all so harmless. Hardly. 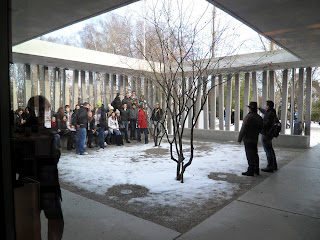 The first building on the site is the Visitor's Center-built fairly recently and very modern. I was immediately struck by the scene of a large group of students and their teachers posing for a group photo-I thought, this seems really weird. This is obviously a very sacred place and this scene feels like everyone is on holiday or something. I realized they were on their way in to the Memorial and not on the way out. The groups were much more somber as they were leaving I discover. 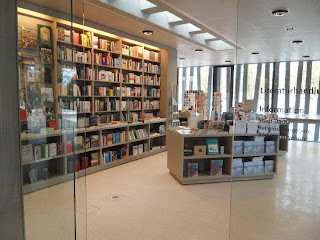 There is a very modern book store and a big cafeteria and dining area-also very helpful information people who speak many languages-it turned out there were many different nationalities on site that day which is probably the norm. The 20 minute movie I watched first off was shown in four languages-English, German, Italian and French. I don't think there was a Russian version but I could be wrong. There were certainly a large number of Russians held here and who died here. 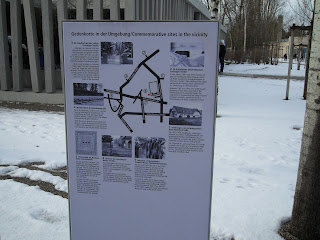 Throughout the grounds are large displays in 4 languages that give the history and details about each area of the site. Apparently the whole memorial was established and funded by the Bavarian Government. There is no charge to enter and no place on site to even make a donation. 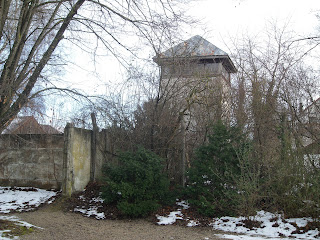 As one walks towards the actual Camp, the new visitor center cheeriness becomes somewhat distant as the actual truth of what this place is that you are about to enter sets in and, I presume, the smiles start to become less among the school groups. Many of the buildings -very very large, by the way-have been preserved and there is a very large museum housed in the huge "Main" building where most of the intake and showers and other large group activities took place. I was really struck by how REALLY big the site was in general-huge-massive-and only this one,albeit large, part was preserved as a Memorial-nearby were even more buildings and grounds and acres from the original Camp that are still in use today by German Rapid Response (Riot) Police. (more about this later). 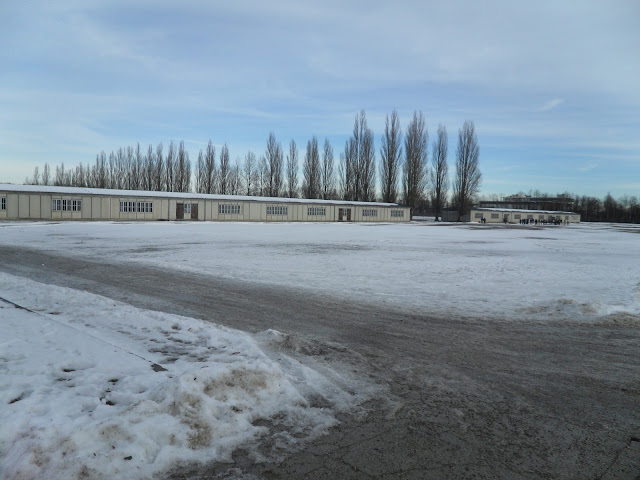 Beyond the main gate(pictured at the top of this post)you enter the main Parade Ground and to the left are two of the restored barracks. There were at least 72 of these and they were designed to house about 250 inmates each but were housing thousands at the end of the War. The tall cypress(?) trees you see run down the main road that divides the two long rows of barracks. As was pointed out in one of the memorial chapels, everything is at right angles on purpose. There are no curves to be found. This was intentional in the design. 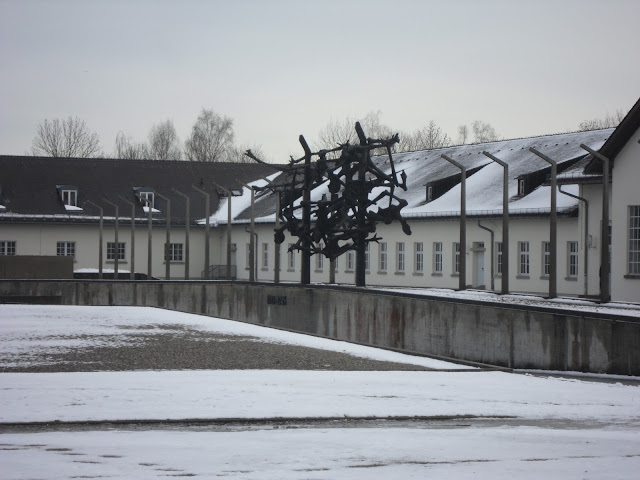 To the right of the Parade Ground is the large long building that house's the Museum and theater and was the Main building on the site. Hundreds of feet long with two very long wings. Out front is a very large sculpture done in the 60's by Yugoslavian artist and Dachau survivor Nandor Glid with the words "Never Again" featured in 5 languages on the nearby wall. There is a large  memorial to the unknowns who died here and a large sunken memorial that is designed to give the visitor the sinking feeling prisoners experienced while interred here. I thought it was very effective. More pictures of this area: 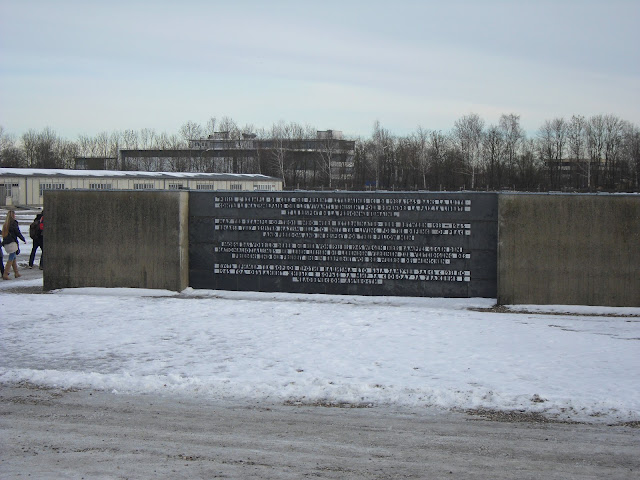 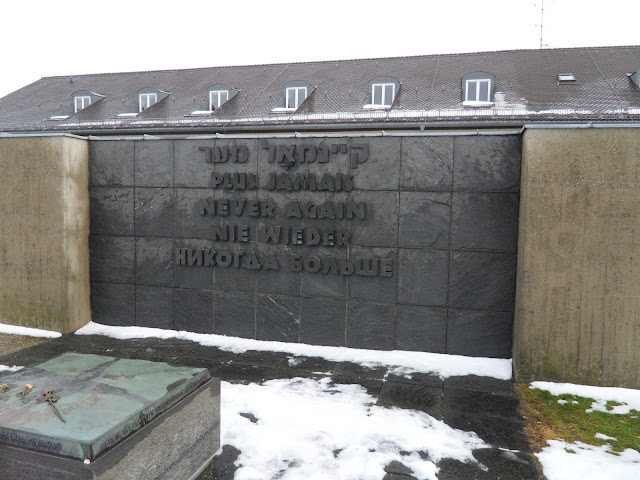 I think it should be required that every elected official (and every political TV talking head for that matter) visit this site as well as other preserved Holocaust Memorials and Concentration Camps. To see this Memorial  in person leaves one with a much more indelible memory than merely reading about it in a book or watching a scratchy newsreel. Or even looking at photos. There is a vibe here that cannot be put into words. That said, the Dachau Memorial site has a very thorough website worth checking out if you want more historical detail than I can add.

The large number of student groups I kept running into started to actually make me feel more positive about this trip. The teachers were lecturing and being very serious about the surroundings and the story and the students were clearly getting it and, I think by this point, were getting humbled, as I was. I did not once get the feeling that this site was just another tourist stop along the way or some kind of macabre peep show-rather it is a living remembrance of the many, many dead and a vivid reminder to all future generations of what can happen when things go very badly wrong with a society. It should be noted that the Dachau Camp started out as a prison for political prisoners in 1939- people who were opposed to Hitler and his group for political reasons. It quickly became a forced labor  prison for Jews, Gypsies, Gays, Priests, Russian POW's and Intellectuals from many countries. The fellow named Besse who tried to assassinate Hitler with a bomb in his podium in 1939 was imprisoned here as were a number of other noted individuals.


Towards the back of the site are four chapels as well as a Cloistered Carmelite Convent that has been here since the 60's. You enter it though an old guard tower.  The vibes I was able to pick up in this area of the site tells me these nuns, in constant prayer for 50 years, have done an amazing job in bringing peace to the dead buried here. And there are a lot of dead buried here in this part of the Camp. It's that point in the tour when it starts to hit just how much death this place has seen. 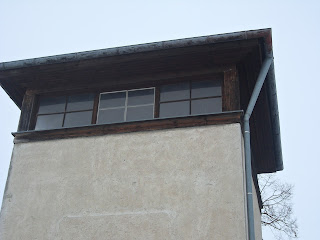 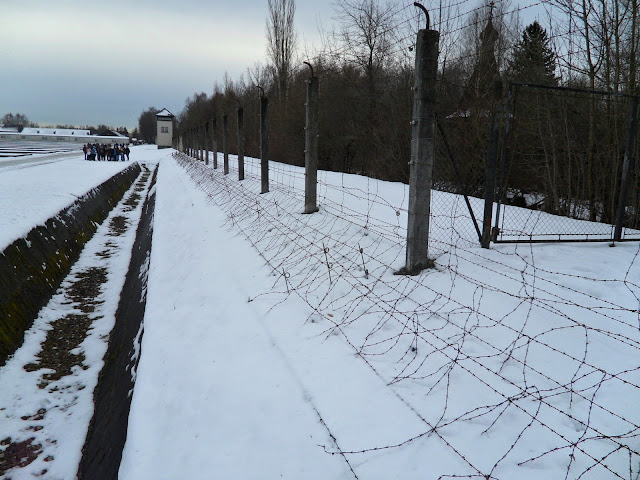 From the Chapel area, the path leads past this long section of fence and ditch-it was once electrified-to the crematorium buildings. (note there is another school group here). 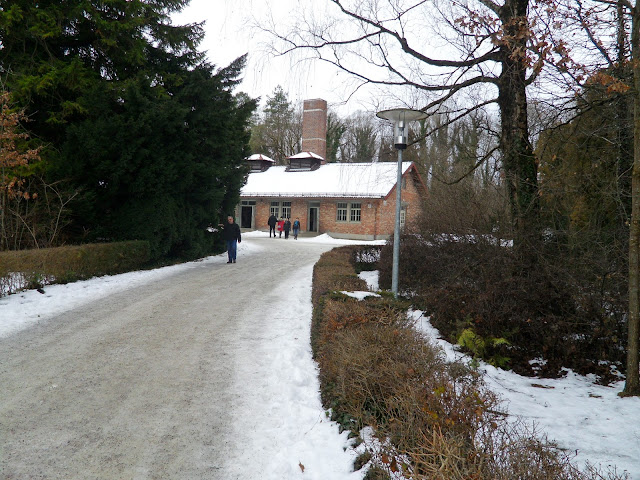 This is where the vibe starts to noticeably change-I will spare you the photos of the actual insides of this place. If you must see them, they are available on the above mentioned Dachau Memorial web site. Needless to say, I did tour the thing and walked through most of it. There is a gas chamber and a couple of crematoriums-also a large room where dead bodies were piled to feed into the fires. I stood in all of them. For the most part, I felt this is where the "museum" part started to separate from the actual energy in the room. It was very uncomfortable to be in there and I did not want to stay long. There is a path out the back that leads to several mass ash burial sites and a "pistol practice range" where thousands were shot. There are also a number of "Never Again" markers and carved stone markers. It was at this point in the tour that I started to experience the  feeling of dread-fortunately it was also at this point that I saw at least 5 large school groups all gathered  getting ear fulls from their teachers. 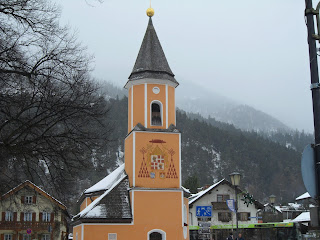 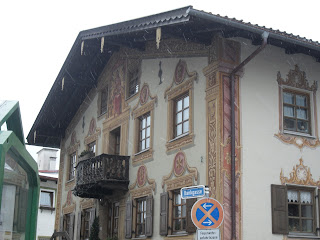 More pictures from an hour south of Munich in Garmisch-Partenkirchen-actually two separate and distinct towns that are connected at the hip and share the two banks of the river that runs through this valley.

Painting very elaborate exterior scenes and other ornateness is something they brought in from Italy hundreds of years ago and most of the public buildings and many homes have giant works of art adorning their walls. (One can only wonder what Woodstock's Planning and Town Board would think of such outright acts of art in the "Colony of the Arts" no less.) 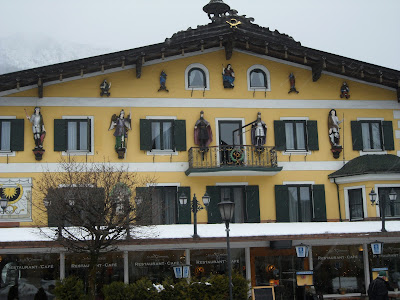 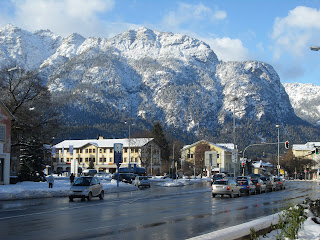 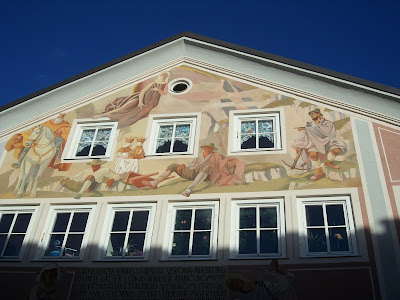 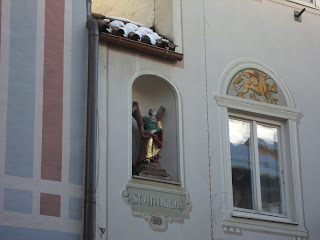 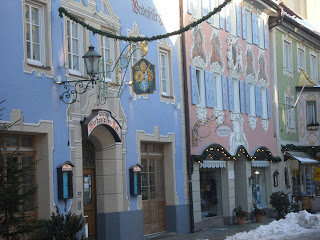 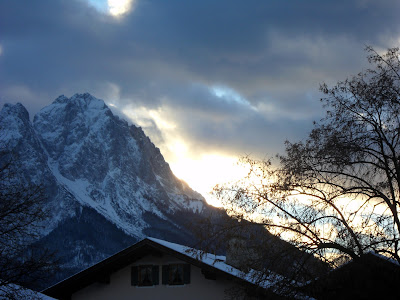 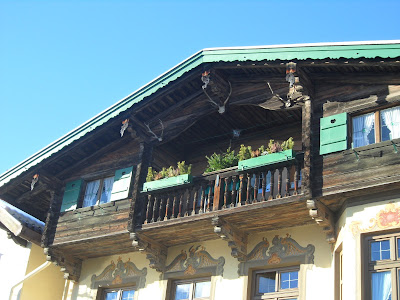 The placing of full size statues on the exteriors is also somewhat common and I'm sure has some historical significance. Antlers are also common as you can see. And I did not not see one chip of peeling paint in my travels here. 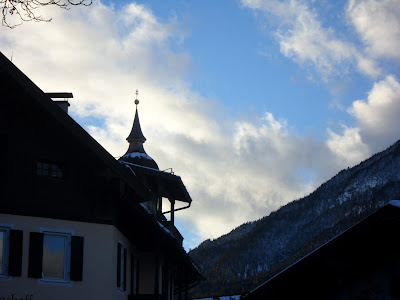 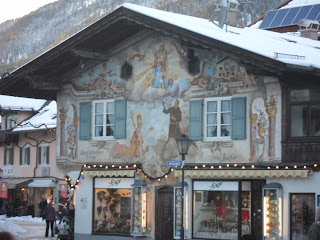 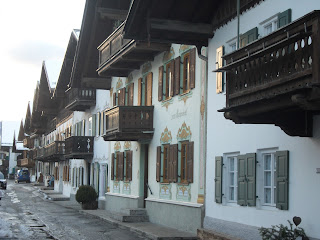 This is one of the oldest streets in the town-Ludwigstrassa-dating to the 1400's. The cattle apparently lived on the first floor and the farmers on the upper levels. One hopes the cows were turned out to the fields for the Spring and Summer and Fall. 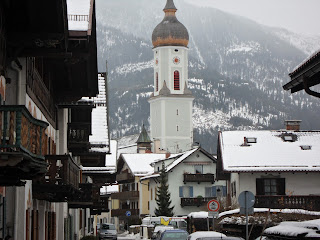 Posted by Michael Veitch at 12:00 PM No comments: