The 1972 Olympics happened here and it was a very eventful moment in Olympic history. The buildings for the most part are still standing and are being used today for many purposes-concerts-swimming-winter events etc. Here's the wikipedia link to the 1972 Munich Olympics- I was 17 at the time and can still remember some of it.. 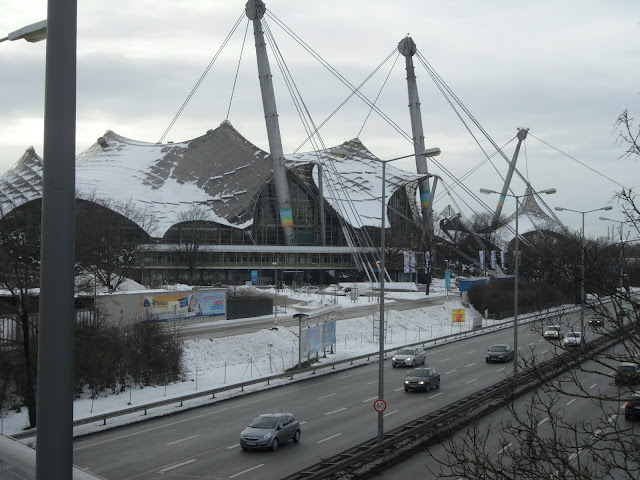 Posted by Michael Veitch at 1:16 PM No comments: 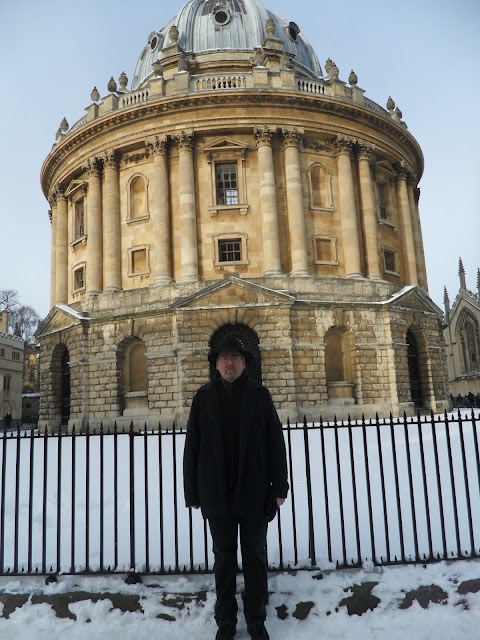 Oxford, standing in front of the "Radcliffe Camera," the historic and not very old (only 1800's) science building. Part of many colleges that make up Oxford. I'm not sure yet which one Bill Clinton attended but will hopefully find out before I finish this post. 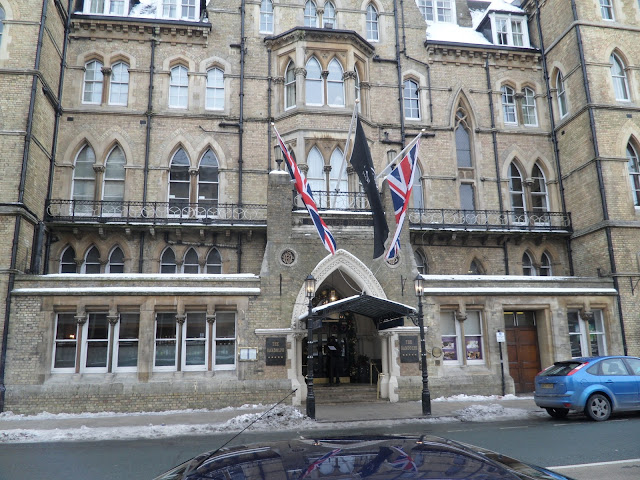 The very large Hotel Randolph owned and run by the Scottish MacDonalds family in the center of town- very plush. 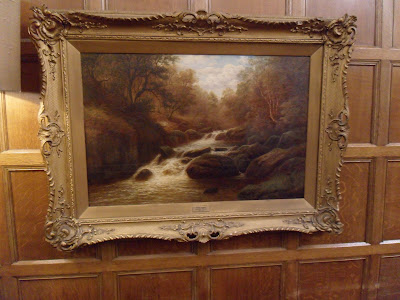 Inside one of the lounges of the Hotel is this painting, done hundreds of years ago and looking very similar to one my father (from Scotland) painted of a Vermont trout stream. Scots love their trout. 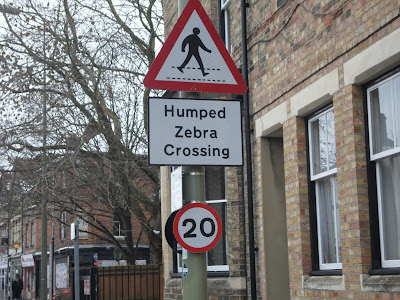 Yes, this is an actual street sign in Oxford and no, I'm not sure what it means, but hey, it's England. 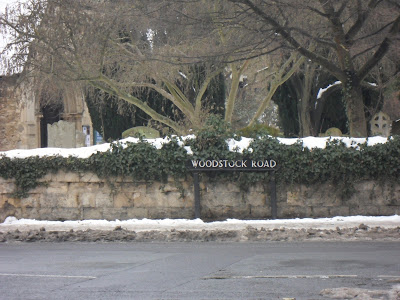 Never far from being reminded of home.

We had lunch in a small pub near Woodstock Road that was once the weekly meeting place for C.S. Lewis and J.R.R. Tolkien. They would sit in front of the fire on Tuesdays and talk for hours, eating lunch and drinking beer, whiskey and tea. They both signed several letters to the owner thanking him for his indulgence (holding a tab?) and they hang over the fireplace in the small room in which they met. I believe it was called the "Rabbit Hole." 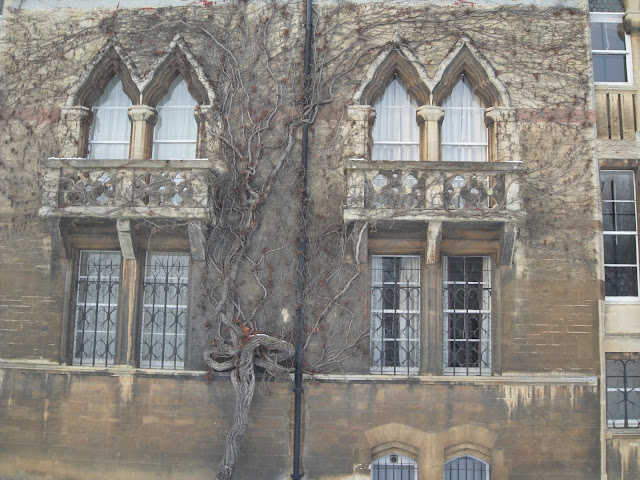 Outside of a section of the Great Cathedral of Oxford, which was closed for the Holidays like most of the rest of the city (I like the vines). We joined groups of wandering tourists looking for something to see besides pubs and clothing stores. The Center of the city is essentially one huge shopping center with no traffic, all pedestrian, and huge throngs of shoppers everywhere-it was "Boxing Day" which is the traditional sales day of the year in England.
A mob scene. 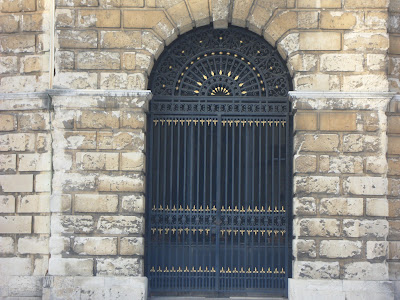 One of many Radcliffe Camera wrought iron doors-I like the gold leaf. 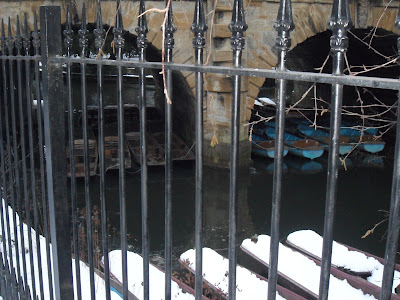 Boats parked under the bridge outside the Botanical Garden on the River "Isis" which is actually the Thames but is only called the "Isis" when it runs through Oxford. Many very large and old trees, huge terrariums and greenhouses with desert climates and tropical climates. Plants collected from all over the world-many orchids. One of the only places open during this weekend. 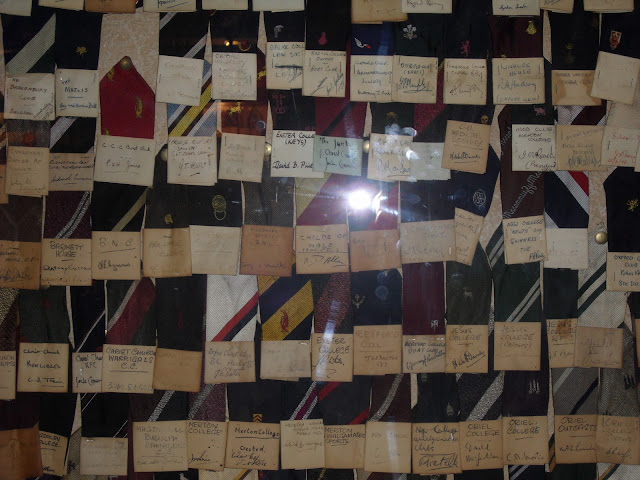 Close up of "cut" ties in Oxford's oldest Pub, The Bear Tavern.
IN SEARCH OF BILL CLINTON'S TIE

Oxford's oldest Pub, "The Bear Tavern" has a tradition dating back centuries involving college students drinking themselves under the table literally and passing out-at which point the barkeep comes over and cuts off the end of their tie and keeps it behind the bar until they wake up the next morning and realize they've had their tie cut. They are then supposed to come back to the bar and "sign" the end whereby it is put in a nifty glass case (with their name attached). I, of course, went looking for Bill Clinton's.

Needless to say, there were so many cut ties in this place, thousands, I could not find Bill's. I said to the barkeep-"I'm here looking for Bill Clinton's tie." His answer was "Good luck, mate."

Here's the wikipedia link to Oxford. Invaded by the Normans in 1066, about the time Malmesbury was getting sacked.  Lots of history here.

Finally, Bill Clinton attended University College at Oxford and also played rugby there. He did not get his degree in Oxford however. If anyone does happen to find his tie at the Bear Tavern, please let me know. Maybe it's now in the Clinton Library? Good luck, mate.

Long rows of ancient stone cottages, all connected at the hip along very narrow streets which all lead to a huge pile known as the Malmesbury Abbey. One of the oldest villages in England, home to its first King.  Here's a link to the Wikipedia page for Malmesbury-http://en.wikipedia.org/wiki/Malmesbury 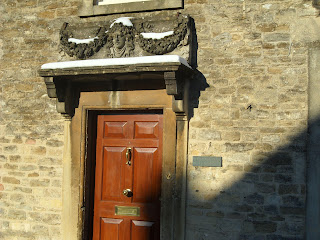 Turner sketched here. The Normans conquered the place in the 1000'sAD. The first Monastery was founded by the Benedictines in the 600'sAD. Despite its age, there is a very active community here and even  though the County Government apparently has most of the control, the locals have managed to put quite a bit of land in conservation easement to protect the vistas and farmland. The inner shops are also very well stocked and lively. The Highway managed to avoid coming close to the town so it's very quiet and unhurried. WOMAD, a large world music festival is held here each year which I'm sure livens up the place.The Cotswold's are close by. 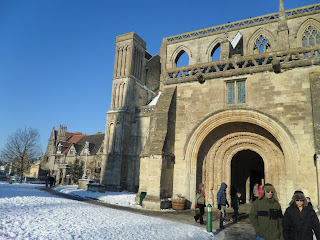 Looking here at the south tower of the Abbey which collapsed in a storm during the 1500's. There is still quite a bit left of a very beautiful and old church in use but the original structure was about five times the current size. I attended a Midnight Christmas Eve service here but missed the Champagne service they held the next morning. To the left is reputed to be the oldest hotel in England. It was the original guesthouse for the Monastery.
Here's a link to the Wikipedia site for the abbey-http://en.wikipedia.org/wiki/Malmesbury_Abbey 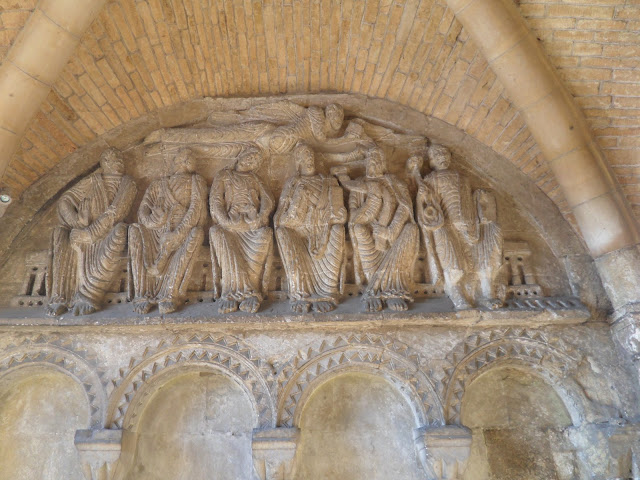 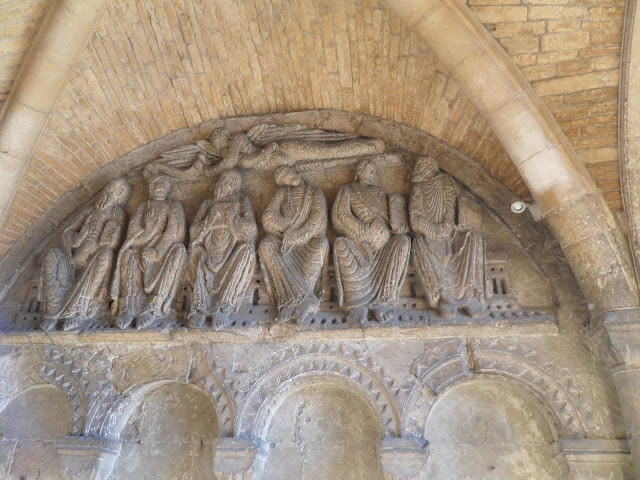 These carvings at the Abbey on each side of the entrance are considered the finest existing examples of Norman art in England. 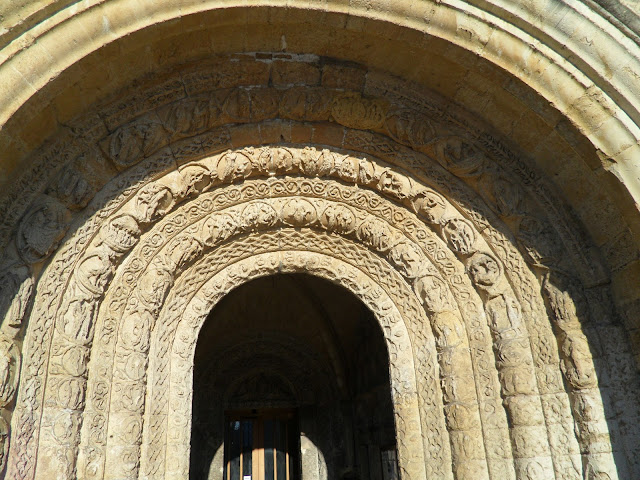 While degraded somewhat by the fact that the Church was used to store gunpowder during the Civil War, and the pollution in the air doesn't help, this entry is still a marvel created by the Normans. 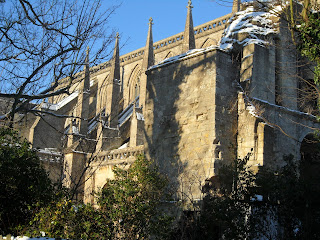 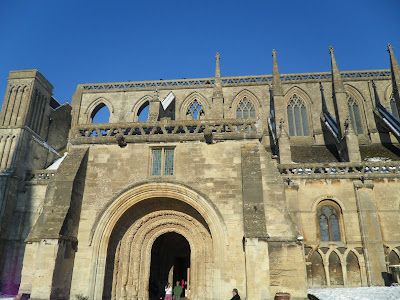 Yes, there was a very blue sky in England this day. It was also very cold and snow had fallen-the rivers were frozen over for the first time that anyone there could remember. I heard concerns about the Gulf Stream currents slowing down and causing the UK to turn considerably colder. The ducks were not sure what to do with themselves and the ice. The Queen's swans were fine. 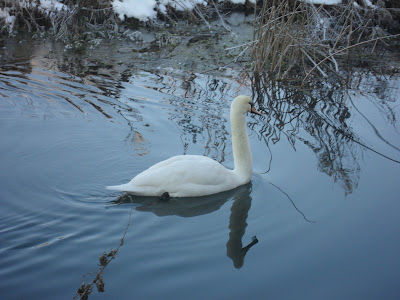 See the Windsor Post for more about the Queen's swans. 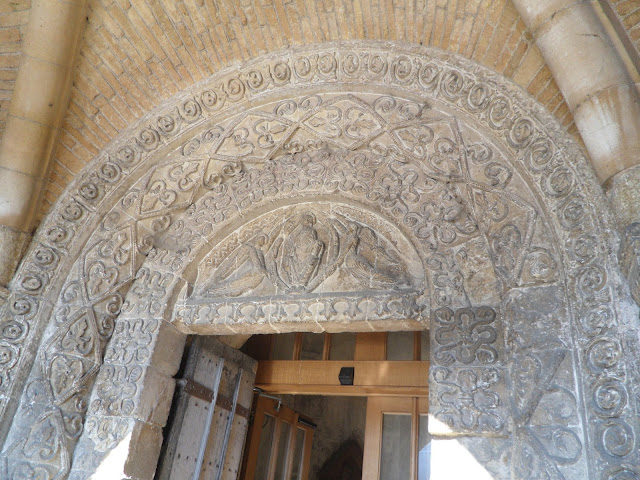 More Norman artwork. Note the very old doors, while not in use, still hang. Here's a closer view of it. 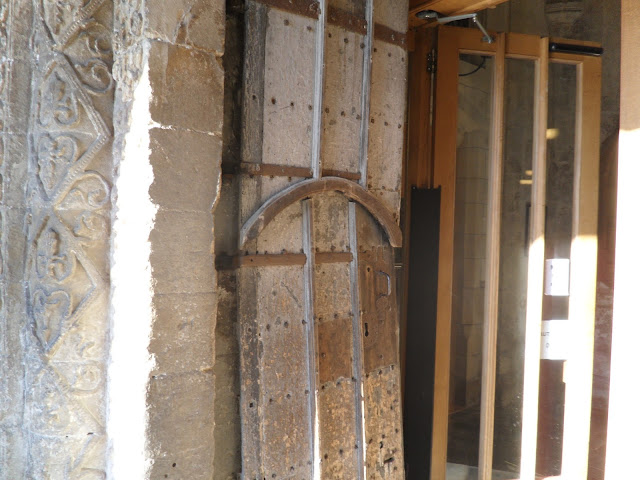 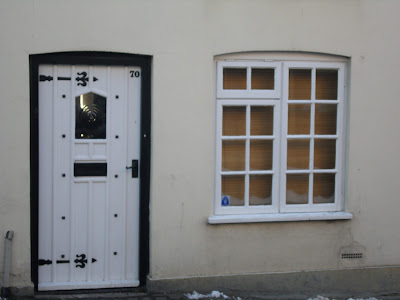 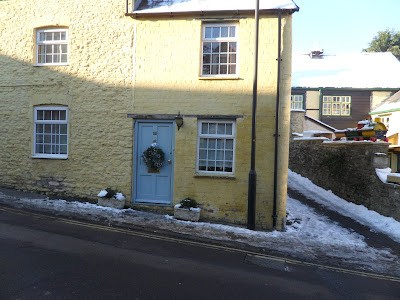 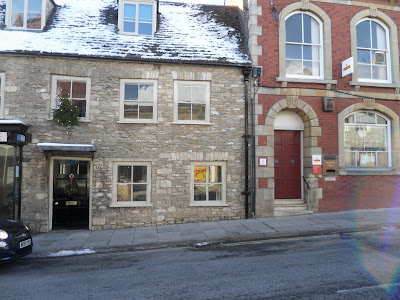 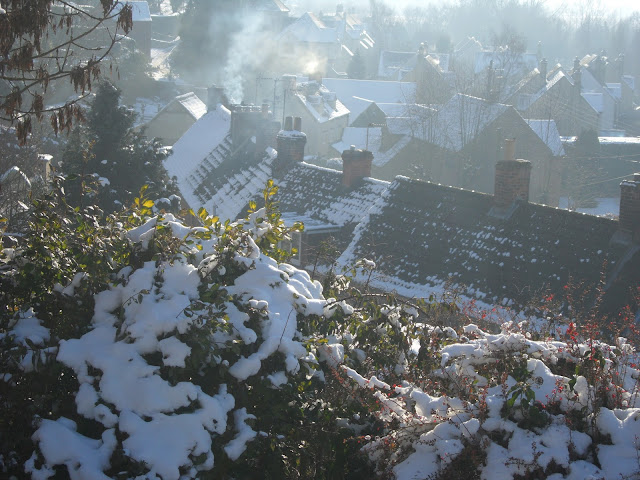 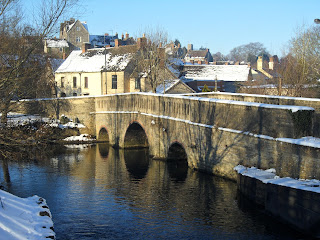 Posted by Michael Veitch at 12:19 AM No comments: